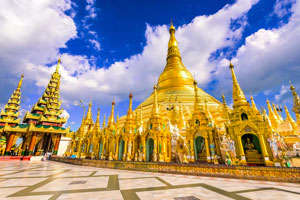 Arrive in Yangon where you will be met by your guide and transferred to your hotel. After a rest, take a walk around the city with its lively street markets in China Town and Indian Town.
Day 2
Yangon sightseeing (B) 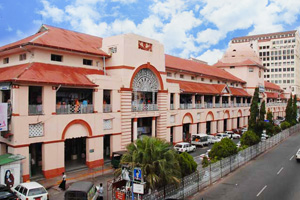 Take in delightful sights such as the magnificent Sule Pagoda, City Hall and the colonial era buildings. Then we will grab the chance to get insight of the local life style which is to criss-cross Yangon River by ferry boat.

Continue to some of Yangon’s most interesting sites including Chaukhtetkyi reclining Buddha Image, originally built in 1907 and 70 meters in length. Bogyoke Aung San Market (formerly Scott Market) was built in 1926 by the British Municipal Commissioner Gavin Scott. It is a shopping paradise for foreigners and locals alike with a wide array of souvenirs and handicrafts including traditionally woven silk and cotton.

The Shwedagon Pagoda, also known as the Golden Pagoda, is a 98-metre gilded stupa which lies to the west of Kandawgyi Lake, A wander around the Shwedagon is an unforgettable experience. 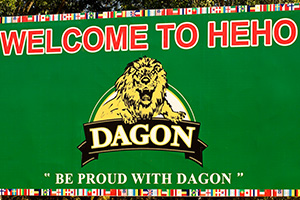 Fly to Heho and upon arrival in Heho airport, start our expeditions by bike. (Heho airport to Nyaung Shwe jetty (25km, 100 Hm). Board long-tailed boats for the journey to your hotel built on stilts above the water.
Day 4
Inle-Indein-Inle

Today you will voyage up the channel to the archaeological site of Indein with its hundreds of Shan stupas. Here take a short walk along a river and lush bamboo forest. 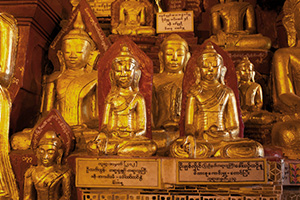 Today our journey leads to Pindaya. It is one of unforgettable experiences passing through the paddy fields, yellow sesame fields, bamboo forests.

In the afternoon visit Pindaya Cave which is set in a limestone ridge overlooking a picturesque lake, where thousands of different types of Buddha images are on display in the various cave chambers. Visit some local houses where families produce Shan Paper and parasols. 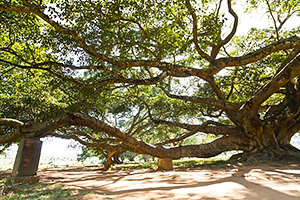 Light trekking to See-Kya-Inn Hill tribe village (3 – 6½ hours, Height Meter 600 – 100 Hm). Enjoy the breathtaking views, time and the trail leads through tea leaf plantations on the traditional villages of different ethnic groups: Pa-O, Danu, Taungyo and Palaung. Visit the typical Farmhouse where have the chance to gain an insight into the simple life of the tribe people. Lunch box will be served.

In the later afternoon, arrive back in the hotel 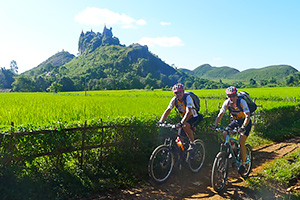 Today we will be experiencing a very challenging path through a mountainous and forested region and most beautiful landscape we have ever seen.

Drive to Kyone Village where the bike riding starts. While biking, enjoy the very charming scenery through the Shan Highlands. Biking route will be ended in Myo Gyi village (107 km, 450 – 1110 Hm up, 2200 Hm down) where one will take the car to Mandalay. 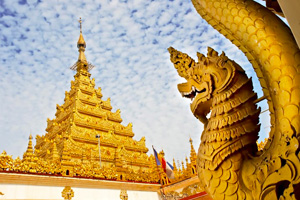 Take the bike to Mandalay Hill to enjoy the sunrise. Why don’t we sit in a Tea-shop to taste the tea culture which is very famous among Myanmar people?

Visit the gold leaf beaters – back-breaking work but highly regarded. Men now have the chance to place their gold leaves onto the most holy Buddha image of the country: the spectacular Mahamuni that’s been growing in size every year by more and more thick layers of gold. 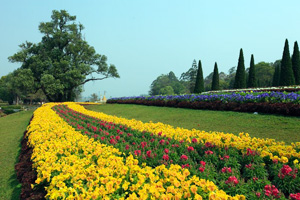 We are going to taste the local train experience today (approx. 4 hours). Upon arrival at the station, transfer to the hotel by bike.

Explore the town centre by the famous horse-drawn carriages. Sightseeing continues to the local market and the National Kandawgyi Garden, the beautiful botanical gardens of Pyin Oo Lwin. The cooler weather allows many flowers and fruits, commonly found in temperate climates, to thrive here. 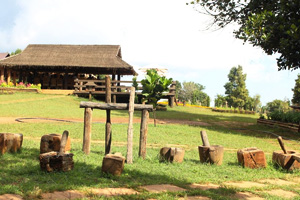 Morning enjoy the bike ride down to Mandalay (68km, 150Hm up, 1100 Hm down). Enjoy the panoramic view and stretch out our legs walking in a village on the way. 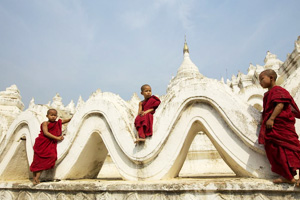 Excursion to Mingun located 11 km up the Ayeyarwady River on the west bank from Mandalay, Mingun has a monumental uncompleted stupa began by King Bodawpaya in 1790. King Bodawpaya also had a gigantic bell cast to go with his huge stupa, the Mingun Bell weighing 90 tons, and is today the largest ringing bell in the world. Hsinbyume Pagoda: Just a couple of hundred yards from the great stupa and bell lays the beautiful white Hsinbyume or Myatheindan Pagoda with a distinctive architectural style.

Proceed to Sagaing located on the Ayeyarwady River, 20 km to the southwest of Mandalay on the opposite bank of the river. Sagaing with numerous Buddhist monasteries is an important religious and monastic center. The pagodas and monasteries crowd the numerous hills along the ridge running parallel to the river.

Ava,founded in 1364, remained the royal capital for almost 5 centuries. The impressive Maha Aungmye Bonzan, a monastery built in 1818 is the main attraction.

Continue to 1.2km long U Bein wooden Bridge to enjoy the beautiful sunset. 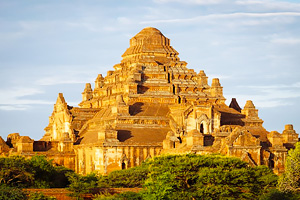 Today highlight is the Irrwaddy river trip from Mandalay to Bagan. This great waterway flowing from the northern tip of Myanmar into the southern delta and thence into the sea, a voyage of over 1240 miles, is a lifeline to the people. It played important roles all through the course of history, the river’s life forever entwined with events in legends, in victory, in war and in triumphant tours by kings and princes.

During the journeys we can admire the natural beauty of the river and the life its banks while relaxing on the sundeck. If time permits, stop at Yandabo, a village specializing in Pot-making, where the peace treaty of the First Anglo-Burmese war was signed on Feb.24, 1826. Visit the Pot workshops, the monastery and the school.

Disembark at the late afternoon in Bagan jetty. 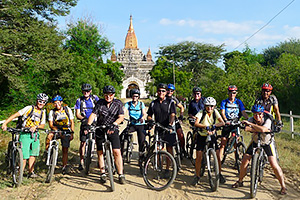 Have a wander around the traditional market in Nyaung U. At the stunningly beautiful golden dome of Shwezigon pagoda you will hear the story of King Anwaratha and his conversion to Buddhism, Gu Byauk Gyi, a temple with exquisite murals of Jataka scenes, Khay Min Ga Temple noted for its spectacular panoramic view of the area’s many monuments and Ananda Temple with four huge standing-Buddha images and numerous seated figures arranged around the interior gallery.

Afternoon visits to lacquer craftsman’s workshop in nearby Myingaba village. Sightseeing continues with visits to Manuha Temple, built in Mon style in 1059, Nanpaya Temple, a unique sandstone monument that is said to have been the palace of King Manuha, and Myingaba Gu Byaukkyi Temple (under the protection of UNESCO), noted for its ancient monuments. Enjoy the sunset at Dhammayazika Temple. 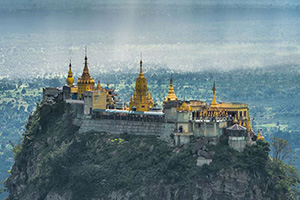 Excursion to Popa which is an extinct volcano. En route, stop at Palm Juice shop and see the process of Palm Juice and Jaggery. Upon arrival at Popa, volcanic plug that houses a picturesque complex of monasteries and Pagodas which can be reached by a winding 777 steps. After a short visit in Popa, drive back to Bagan and transfer to the airport for the flight to Yangon.

Transfer to the hotel. 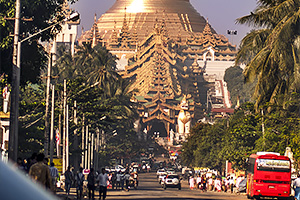 The whole day is at leisure before international departure flight.

Regarding accommodation, it can be upgraded depending on your budget. We are working with numbers of good quality hotels ranging from 2* up to 5* Deluxe. Tourism in Myanmar has increased considerably in the past year and there could be a great shortage of hotels in most cities if the traveling period falls on high season (Oct~Mar). We will try our best to allocate best available hotels matching with your desired category.

Fill out the required
red fields
Total $3755
Book
Share This